Hail the Brave kicked off this week’s runners when he ran at Wetherby on Friday in the two mile six furlong handicap hurdle and Sam Twiston-Davies rode. After his injury after his last race when he won Phil Kirby had given him plenty of time to recover but the stable form was a worry going into the race. Jumping prominently from the start Sam had Hail the Brave jumping well and Hail the Brave was keen to get to the front and contest the lead. Jumping well Hail the Brave and Sam were still up front as the field made their way down the back straight for the final time and jumping the final flight of hurdles before the field began to take the sweeping turn into the home straight HTB and Sam were still in a great position at the head of affairs. It was here Sam had to give HTB a crack with his whip and within a few strides after coming under pressure HTB began to lose his position very quickly and drifted back through the field. They managed to jump the third last hurdle but Sam accepting the situation pulled up HTB.

On a very busy day Yourartisonfire kicked off Saturdays runners when he went to Doncaster to run in the Spring Mile when Silvestre Da Sousa rode. YAIOF had finished 3rd in this race last year before running disappointedly towards the end of the season. Drawn in stall eighteen Silvestre allowed YAIOF to drift across to the centre of the course where to entire field grouped together. Silvestre got YAIOF covered in midfield as the field made their way down the home straight. YAIOF was travelling powerfully and Silvestre every so often had to take a pull and rein the horse back. As the leader hit the furlong from home marker most of the field were under pressure howe haver Silvestre still hadn’t gone for YAIOF and they strode up to the leaders quarters. At this point Silvestre pushed YAIOF forward and then hit the front where they were quickly joined by another horse on the far side of the field. Inside the final furlong YAIOF and the other horse were head to head and looked to have the race between them when from virtually out of the clouds a horse finished fastest of all and swept past both YAIOF and the other horse and quickened clear to win. YAIOF and Silvestre kept going and were narrowly denied 2nd place. It was a great effort from YAIOF who really seems to thrive in the early part of the year, a welcome return to form.

Yeeoow was up next in the six furlong handicap at Kempton where Joey Haynes rode and they came from stall nine. From the break there was a strong pace from a couple of runners on Yeeoow’s inside and Joey tried to get Yeeoow across but as the field hit the turn out of the back straight Yeeoow and Joey were trapped wide round the turn. As the field travelled down the home straight the leaders were still travelling well whilst many runners in behind were struggling to get on terms and around two furlongs from home Joey had to get to work on Yeeoow who came under his drive. All the way inside the final two furlongs Yeeoow was responding and although he wasn’t gaining on the leaders they weren’t getting further in front. Inside the final hundred yards Yeeoow was passed for third place but he responded and as he crossed the line it was a desperate call whether he had regained third place. Howe haver the photo showed that Yeeoow had finished in 4th place only beaten a nose for third with it being just over a length to the first and second placed horses. A good effort from a bad draw and Yeeoow showed a great attitude to run on all the way to the line.

Heavenly River was up next in the first division of the one mile two furlong apprentice handicap back at Doncaster where Jordan Vaughan rode and they came from stall ten. From the break out wide Jordan allowed Heavenly River to find her stride and they settled in midfield. As they settled down into a rhythm they seemed to get slightly hampered which caused them to end up at the rear of the field. As the field made their way down the side of the course and into the home straight Heavenly River was still at the rear of the field. As the field began to make progress to go inside the final three furlongs Jordan and Heavenly River were still going nicely but with a big field in front of them Jordan was having to weave past horses and Heavenly River really seemed to be enjoying this experience. At the furlong from home marker just as Jordan and Heavenly River went for a gap they were hindered and Jordan had to pull Heavenly River around a couple of horses to get a clear run. Just at this point the favourite burst through into the lead and quickened clear. Heavenly River now in the clear began to chase the leader and the second placed horse and Jordan got to work on Heavenly and they finished with a good burst and  at the finishing line they finished in 3rd place beaten a short head for second. It was a really good run and more importantly she really seemed to enjoy herself and I am sure there is a lot more to come from her now.

Frontline Phantom finished the day when he ran in the second division of the one mile two furlong apprentice handicap at Doncaster where Peter Sword rode and they came from stall thirteen. As the stalls opened Frontline Phantom came out the stalls in an awkward fashion and Peter immediately had to push Frontline along to get him running. Unfortunately this left them at the rear of the field and unlike the first division where the pace was a steady one the leaders in this division went off quickly and the field were soon strung out. Peter allowed Frontline to find his stride and rounding the turn into the straight they were still at the rear of the field. Peter angled Frontline Phantom out on the outside of the field to get a clear run and all the way up the home straight they passed horse after horse, but their chance had gone at the start of the race. They managed to finish in 7th place and with a better start they no doubt would have been a lot closer to the placed horses.

Check out part 2 of Mark Rowntree’s blog on OnToAWinner – “Success Breeds success” – In Part 2 , Mark speaks to Chris (@ontoawinner3) about the history of the syndicate and hopes for our new crop of 2 year olds– Mark can be found on twitter @uptheirons007

Karl Burke speaks to the Racing Post about Toocoolforschool 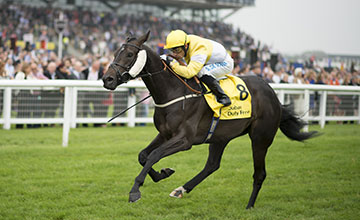 Toocoolforschool on the gallops , last seasons runaway Mill Reef winner has wintered well. Current target is the  Greenham at Newbury in April.

London Protocol on the Gallops, coming along nicely

Check out our youtube video of some memorable moments from 2014.

We had a superb morning at Karl Burkes Spigot Lodge stables yesterday.

There was a great turn out for the event and all of our owners thoroughly enjoyed the hospitality and very informative session put on by Karl and his excellent staff at Spigot Lodge.

All of the horses look in great shape and there was a buzz of excitement about the upcoming 2015 flat season. We cant wait!!

Below are a selection of photos from the day.