Show Me Show Me Flies Home for 3rd in the Group 3 Molecomb Stakes!!

The Showcasing Colt was slowly away and seemed to be slightly outpaced in the first half of the race but as the contest began to come to its conclusion, and with all the jockeys going to work on their mounts, Show Me Show Me made blistering headway to pass most of the field; snatching 3rd in the process!

A fantastic run by the Showcasing Colt who backs up his performance in the Weatherby’s Super Sprint! The Colt was a £24,000 Goffs Premier Yearling purchase by the Ontoawinner buying team. He is a relation to our first Group winner in Toocoolforschool, continuing our success with the family, plus backing up our association with Showcasing progeny!

A huge well done to his owners on their Group place success! A thank you and well done to Richard Fahey, Paddy Mathers and all the team at Musley Bank!

Well done again to all! 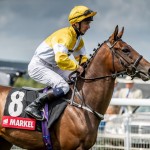 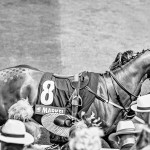 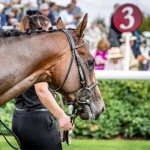 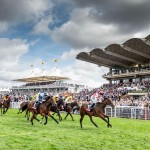 Space Ace made her third racecourse start a winning one by taking the Lingfield Novice Auction today (24th July 2019) winning by a cosy 1 and 3/4 lengths!

Space Ace broke smartly from the stalls to be prominent from the start; she maintained her position throughout the race using her experience to settle nicely on the near side rail. As push came to shove the filly had too much for her rivals as she sprung clear in good fashion to make her from read 231, a very good start to her racing career!

Well done to all her owners on their success, and a well done to Archie Watson, Adam McNamara and all the team at Saxon Gate!

It looks as though we have a lot to look forward to with this filly! Well done all 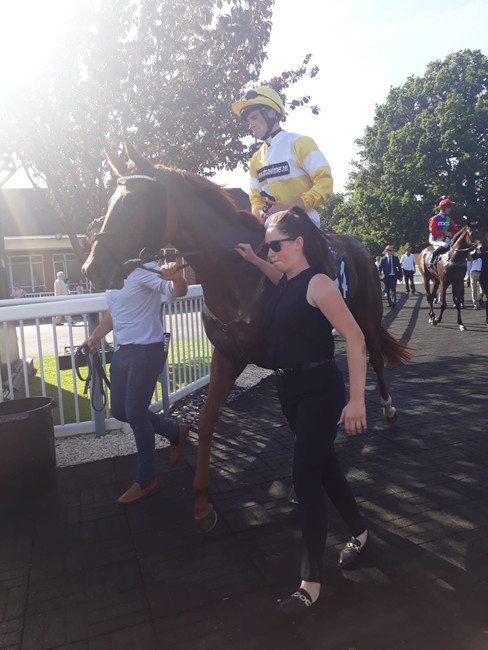 Compton’s Finale made the trip across from Ireland to Ayr a fruitful one after running out an easy 2 length winner of the 2:30pm handicap at Ayr’s Monday the 22nd of July meeting!

Held up early in the race, the gelding made smooth headway to win very comfortably in what looked a nice little contest, showing there should be more to come from the Compton’s Place Gelding!

Congratulations to all his owners on their win! Thanks and well done to Adrian Keatley, Ceiren Fallon and all the Team at Adrian’s yard, without them this would not be possible!

This is not the first horse from this family we have had success with having bought his 4-time winning half brother Suitcase ‘n’ Taxi for just €10,000 a few years ago and he is also a relative to our classy sprinter Flying Pursuit, a great family for the Ontoawinner team!

Compton’s place is due to run tomorrow at Musselburgh, hopefully he can run another good race before his journey back to Ireland! 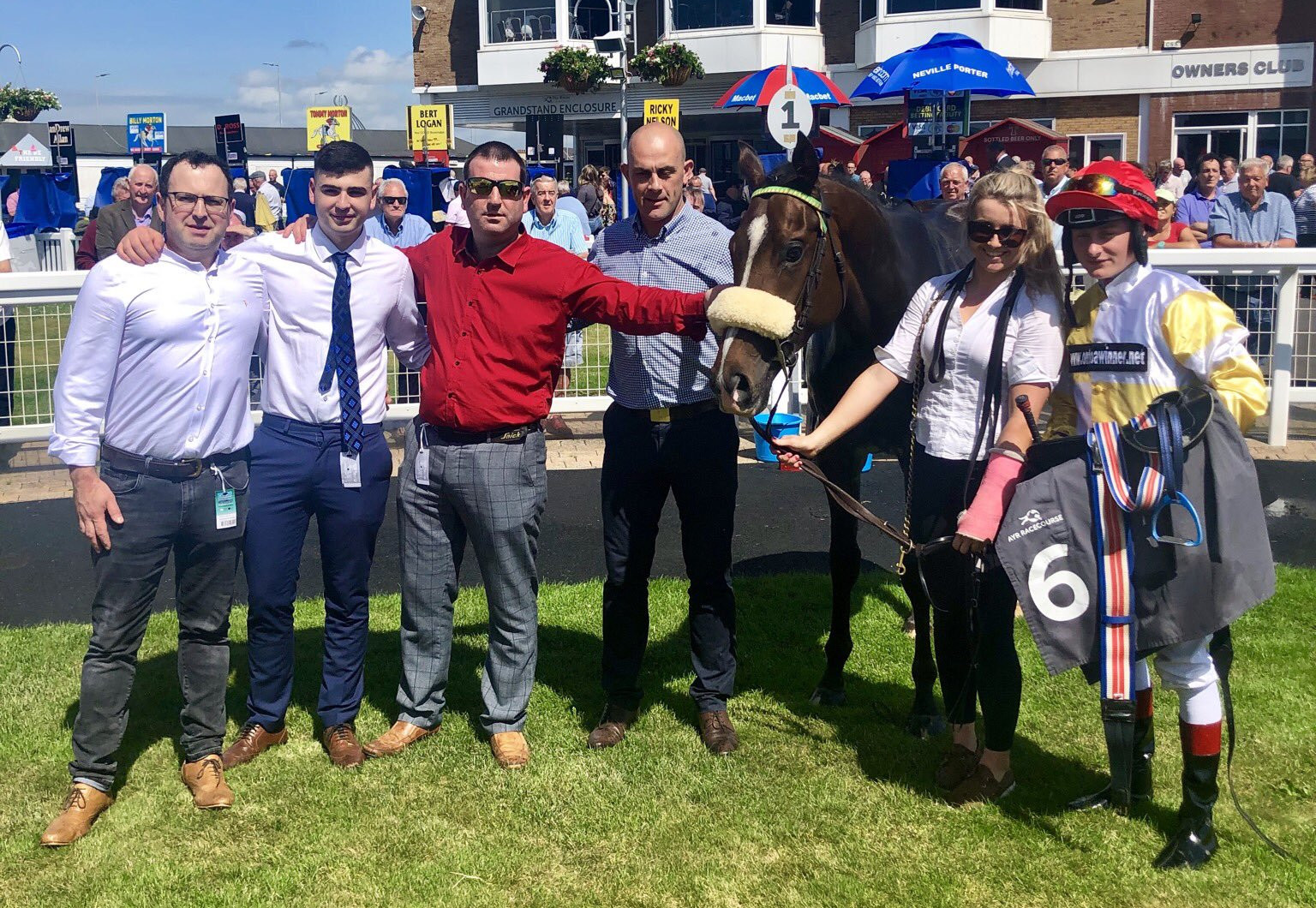 Show Me Show Me So Near in Super Sprint 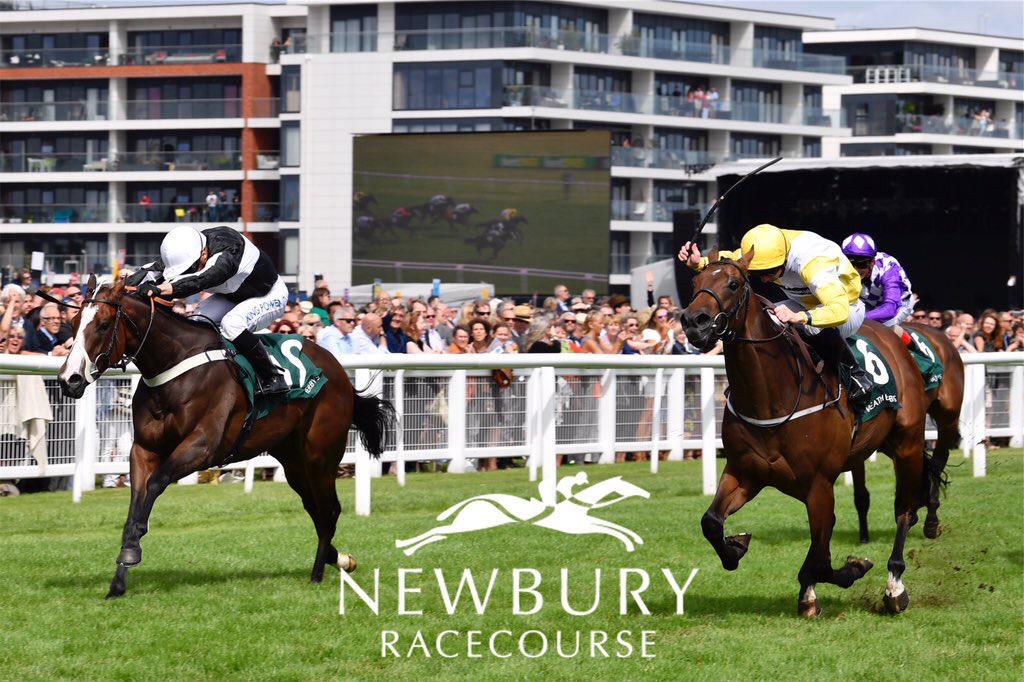 Show Me Show Me ran a stormer to finish 2nd in the valuable Weatherbys Super Sprint highlight race of the Saturday 20th July meeting at Newbury, picking up a nice pot of around £50k for second place, which represents a very nice return for a horse bought by Niall and Simon at the Goffs Premier Yearling Sale for just £24k!

Show Me Show me was off the bridle 2 furlongs out, but sprouted wings to fly home to take the lead close home. With less than 50 yards to go it looked as if the race was won but a flying filly of Rod Milman’s collared the Showcasing colt late home, who had to settle for a fantastic 2nd!

Well done to Richard Fahey, Paddy Mathers and all the team at Musley bank to have the horse in peak condition for such a great contest!

Congratulations to connections of the winner, who bought the horse for a mere £3,000, some achievement!

Show Me Show Me looks to have a nice future! Well done to all his connections!

The ever classy 4 year old Corinthia Knight finally got the elusive win on turf he so deserved in impressive style in the feature race at Pontefract on the 19th July night meeting!

Tracking the pace the chestnut gelding surged past the leader to win by a cosy 1 and a half lengths to record a second success of the season!

Well done to Archie Watson and all the team at Saxon Gate and well done to Danny Tudhope on a great ride! Congratulations to his owners on another success with the Society Rock gelding who only cost 15,000 Euros!

Another mention has to go to the other bargain purchase,Staxton, a £24,000 breezer from Goffs UK who ran a cracker of a race in the Scottish Stewards Cup to finish 3rd off a rating of 100. Carrying 9st 7lb in a race of that quality is not easy, so well done to his owners, Tim and the team, and David Allan who gave him a patient ride. 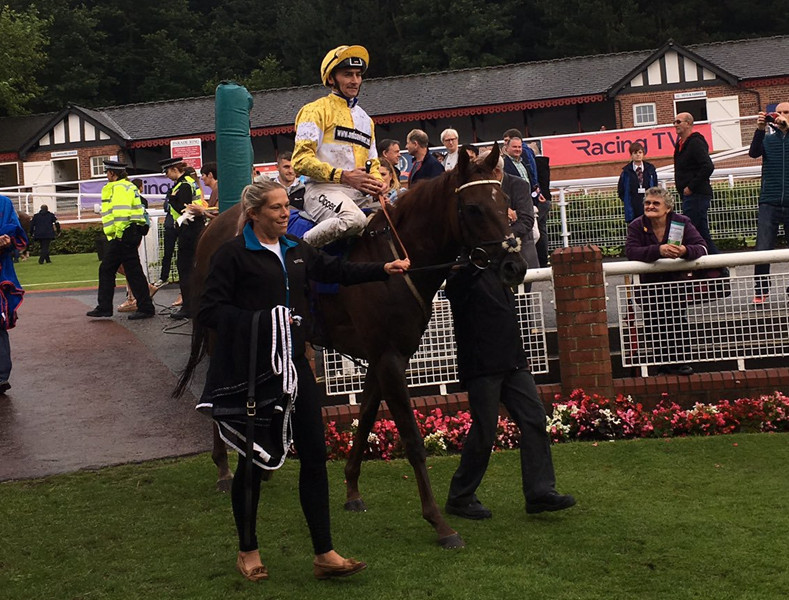 Pinarella breaks her maiden at Ripon!

Pinarella broke her maiden in impressive style at Ripon on Monday, fighting gallantly to the line to win by a length at a cool 14/1

A deserved success for the filly who has knocked on the door several times! After that gutsy performance you’d think she’d win again!

Thanks and well done to Ben Haslam and all his team and to Andrew Mullen (Midge) who walked the filly all the way to the start after getting spooked just outside the parade and gave her a cracking ride as well!

Well done to all her owners, hopefully that kick starts her career now! 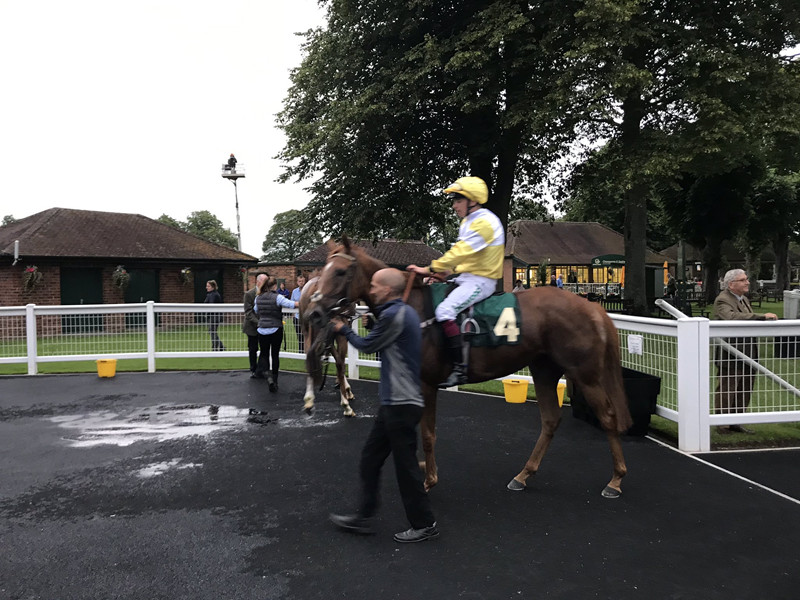 Never in Paris made her racecourse debut at Nottingham last night and landed the prize in great style.

She handled the preliminary’s very professionally and travelled like an old pro to the start.

She broke from the stalls well and Clifford Lee (Jockey) dropped her out at the back and tracked the leaders. The Archie Watson trained favourite who had run 3 times and is rated 85 made the running and made it a good solid pace.

Never in Paris ran a bit green midway through the race and hitting the 2 furlong pole Clifford gave her a slap down the shoulder to make her concentrate and pick the bit up. The race then started to get into full swing with the favourite kicking for home. Clifford gave the filly a couple of smacks and she picked up nicely and with ½ a furlong to go she hit the front and started to pull away from the pack to win easing down by 2 and ¼ lengths.

Cliff said she had won well considering how green she had run through the race only getting the hang of things in the final furlong.

Thanks go to Karl Burke and all the Spigot Lodge team who work tirelessly to get the horse to the track.

Congratulations to her winning owners. It looks like you are going to have a lot of fun with this very smart looking filly.

Check out pics below 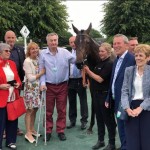 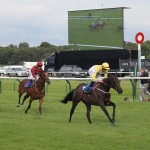 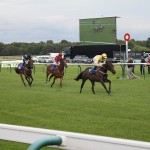 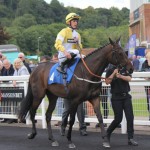 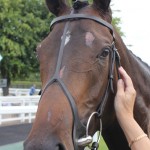 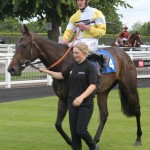