Parallel World notched up his 3rd career success months at Wolverhampton’s 29th of January meeting, staying on well to take the spoils!

The Morpheus gelding broke well and took up the early lead. Parallel World was headed but continued to sit behind the leader throughout the middle of the race, turning the final bend Harrison (Shaw, Jockey) got to work on Parallel World and he found another gear, using his stamina he stayed on nicely to win by a length!

Well done to all his patient owners on your success, he’s a good horse on his day, that’s for sure! Thank you and well done to Karl Burke, Harrison Shaw who gave him a nice ride; that was Harrison’s 100th success so a double well done to him, and everyone at Spigot Lodge!

Parallel World was purchased by Karl Burke and the OntoaWinner buying team at the Tattersalls September Yearling Sale in 2017 for €15,000!

Shallow Hal notched up his 3rd success in 4 months in a nice Class 3 contest at Southwell’s 28th of January meeting, showing a gusty display to win in the highest grade he ever has!

The Mayson gelding broke on level terms and took up a prominent position under Pierre-Louis Jamin. Turning the final bend, Pierre-Louis got to work on Shallow Hal and he responded well. It soon became clear Hal wasn’t going down without a fight; he galloped out to the line to win by a neck with determination prevailing!

Well done to all his owners on your success, that’s the fifth victory of his career, he’s been a good horse for you! Thank you and well done to Karl Burke, Pierre-Louis Jamin who has partnered Shallow Hal to his new heights of form, and everyone at Spigot Lodge!

Well done again to connections on your success, long may it continue!

Secret Handsheikh bolts up at Southwell!

Secret Handsheikh got his 2021 season off to the perfect start at Southwell’s 19th of January meeting, putting in an awesome display to win by a wide margin!

The Mayson gelding broke well and quickly took up the running under Hollie Doyle. Secret Handsheikh always travelled well and turning the final bend he kicked away from the field to win by a cool 5 lengths, a nice performance on his first appearance of 2021!

Well done to all his owners on your success, he’s now won in both years of his career, no mean feat! Thank you and well done to Archie Watson, Hollie Doyle for a nice ride and everyone at Saxon Gate!

Secret Handsheikh was purchased by Blandford Bloodstock and the Ontoawinner buying team at the 2019 Tattersalls Ireland September Yearling Sale.

Well done again to connections on your success, hopefully this is just the beginning of a good season for him! 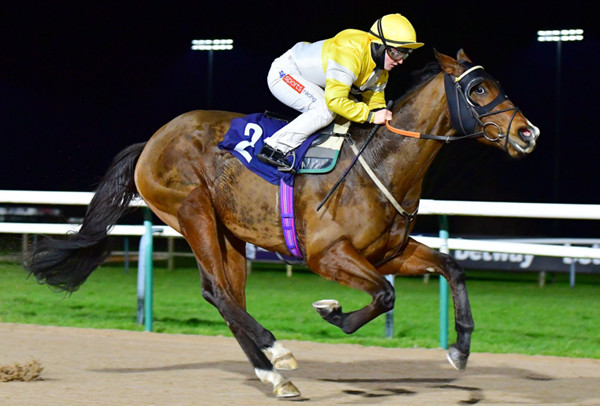