Staxton gets his season off to a flyer

Staxton took home the Silver Sprint Trophy at Ripon at their 25th of April meeting!

The Equiano gelding broke well and Duran settled him in mid division on the stand side. Staxton always seemed to be travelling nicely and as the race unfolded Duran urged to go forward and in typical gutsy fashion, he stayed on strongly to lead inside the final furlong and go on to win.

Well done to all his owners on your success, that’s his 7th win of his career and it’s his 3rd in a row at Ripon, he clearly loves the track. Thank you and well done to Tim Easterby, Duran Fentiman who gave him a peach of a ride and all the team at Great Habton!

Staxton was purchased by the Ontoawinner buying team and Tim Easterby at the 2017 Goffs Breeze-Up Sale for £24,000!

Well done again to connections on your deserved success, he’s some horse to be involved in.

For anyone looking to get involved, we have limited shares available in some horses. Check out all available shares here : http://www.ontoawinner.net/available-shares 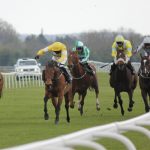 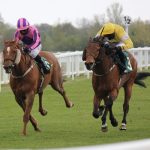 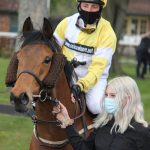 Denzil’s Laughing makes all to win at Catterick!

Denzil’s Laughing got his turf season underway in great fashion, heading into the winners enclosure for the second time in his career at Catterick’s 21st of April meeting!

The Mehmas gelding broke well and despite a bump, took the early lead. Coming to the two pole Callum (Rodriguez, jockey) looked comfortable on Denzil. As the race unfolded Callum got to work on Denzil and he found plenty, staying on nicely to keep all challengers at bay, eventually winning by half a length!

Well done to all his owners on your deserved success, hopefully this is a springboard to a good season! Thank you and well done to Keith Dalgleish, Callum Rodriguez for a nice ride and everyone at the yard!

Denzil’s Laughing was purchased by the Ontoawinner buying team and Keith Dalgleish at the 2019 Goffs Premier Yearling Sale for £28,000!

This is the time of year when the Breeze Up sales begin and everyone is looking for their next superstar. We will be attending the upcoming sales aiming to find our next Group horse. Our Breeze Up purchases/private purchases include the likes of TOOCOOLFORSCHOOL, QUIET REFLECTION and STAR OF EMARAATY. Last year’s purchases also produced the winners QUIET ASSASSIN, QUEEN OF RIO, SHALAAA ASKER, WOBWOBWOB, DONNY MARLOW, THERE’S NO DANGER.

The Breeze Up sales gives us the opportunity to see a horse’s potential and gain an insight into what their future may hold on the racecourse. Despite taking a hit throughout 2020 due to COVID, the popularity of these sales has increased significantly in recent times and Ontoawinner has been able to source top-class horses that offer good value for money as can be seen above. Every year the Breeze Ups produce Group horses and many of those horses produce impressive breezes both visually and on the clock:

For your information, see the full list of Breeze Up Sales below:

If you have any interest in being involved in a potential high-class horse from the Breeze-Up consigners, please let us know by clicking the link below and adding your email.