Heavenly River made her debut at Wolverhampton on Tuesday in the one mile and ½ furlong maiden and Joey Haynes took the ride taking five pounds off. Heavenly broke well and Joey settled her in midfield tracking the leaders. Throughout the race she travelled really nicely and looked to be enjoying herself and as the field went down the back straight she was still travelling on the bridle whilst many others where being scrubbed along. As the field begun to leave the back straight Joey just had to start pushing her along and rounding the bend Joey tried to move Heavenly out from behind a horse in front. It was here disaster struck and Heavenly clipped heels and fell forwards doing a forward roll in the process and dumping Joey to the ground. The rest of the runners continued on and thankfully Heavenly got to her feet and stood motionless. Joey got to his feet and took hold of her. The horse she was about to pass came second so she would of finished in the frame. Heavenly was checked over and was sore in the morning but has eaten everything put in front of her. A very unfortunate incident when she was running a very promising race.

Vodka Red ran at Newcastle on Saturday in the two mile handicap hurdle which was for conditional and amateur jockeys only and Dean Pratt rode. Vodka was supporting a hood and blinkers and they definitely helped him settle in the parade ring. Vodka Red is such a good traveller we were hoping for a decent pace and Dean was instructed to bide his time and try to take up the running at the last if possible. As the race set off Dean settled Vodka out the back of the field and the first two flights were going to be crucial to see whether he had got over being brought down last time out. Vodka flew the first couple of jumps and was travelling strongly. The pace was a strong one and Vodka was pulling himself through the field and travelling down the back straight Dean and Vodka where disputing 3rd / 4th place. Dean had to rein Vodka back and rounding the home turn he was still swinging along. Dean was still taking a pull but a slight mistake at the second last cost Vodka a bit of momentum and a horse on his far side took up the running and went for home. Dean still looked to have the move covered and as they approached the last a good jump was required. Howe haver Vodka just trailed his hind legs through the hurdle and lost impetus. The leader had gone a few lengths clear and Dean and Vodka set off in pursuit. All the way up the run in they were closing but unfortunately the line came too soon and they lost by just over a length. A pleasing run although slightly frustrating he didn’t win but the horse showed that he is more than capable of winning a race before the season is finished.

Mitchell’s Way ran at Carlisle on Sunday in the two mile novice chase and Tom Scudamore rode as Paddy Brennan took a few days off after his fall. The distance was a slight worry but Mitchell’s jumped off in third place and from the first fence he measured all the fences well along the journey. Mitchell’s Way had actually jumped to the front by the time the field reached the bottom of the hill ready for the run back towards the finish.  At the second last Mitchell’s was being challenged by the James Ewart horse but a superb jump took him a couple of lengths clear. Howe haver as they approached the last fence another challenger appeared but with a great leap at the last and Tom driving away Mitchell’s found plenty on the run in to hold the challengers. Three wins on the trot now for this wonderful horse that is progressing with every run. 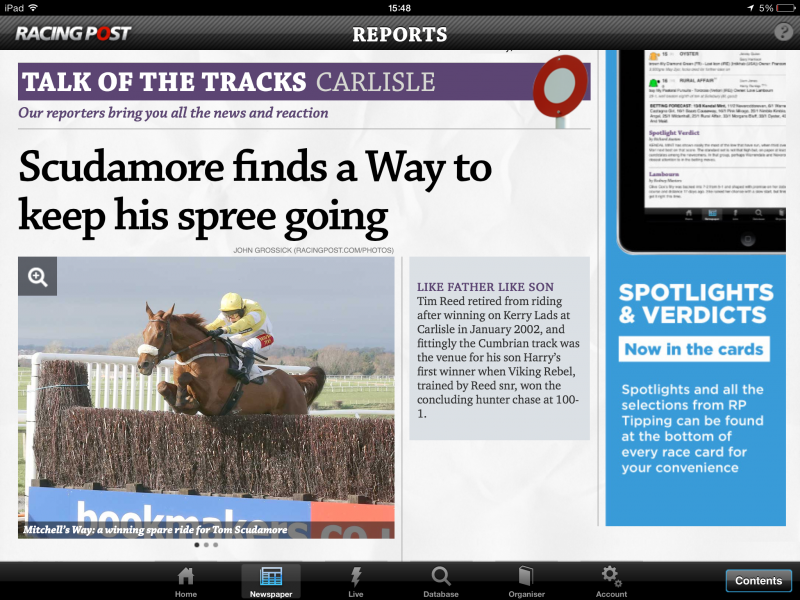 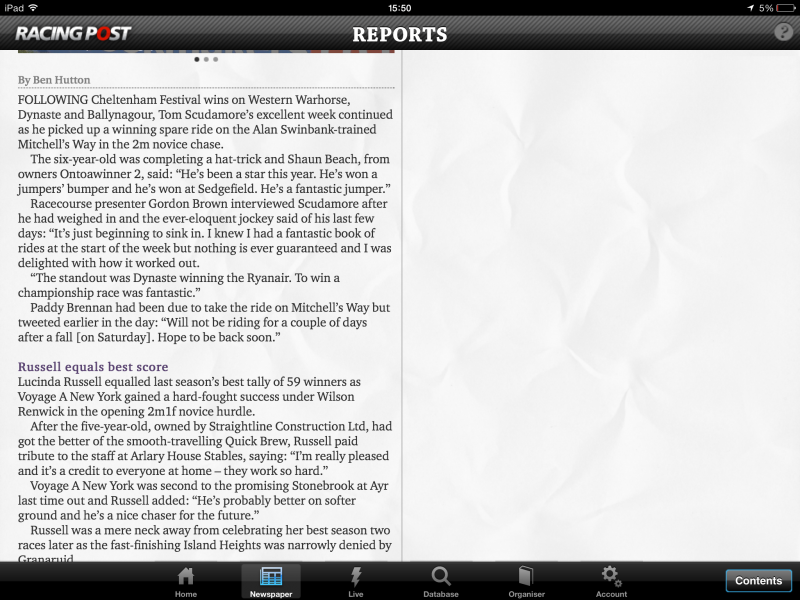