Having won off a mark of 75 previously, Ailsa’s current rating of 59 made it a decent opportunity to get back to winning ways.

As the stalls opened, Kevin seemed to be a bit slow to take the hood off and Ailsa quickly found herself 10 lengths off the lead. Kevin took his time and edged Alisa closer to the back of the pack over the 1st couple of furlongs. By the mile marker, she had made up the lost ground and was positioned at the tail of the field.

Kevin kept her at the back until they entered the home straight where he angled her off the rail into daylight. He began to mount her challenge as they approached the 3 marker and she quickly started to ease past rivals. By the 2 furlong marker she went into a share of the lead, she stayed on strongly to go onto score by ¾ of a length.

Well done to team Tuer and well done to all involved, another winner for an Edwin Tuer trained mare in the yellow and white.

That’s 12 winners for 2013, hopefully the bakers dozen is just around the corner! 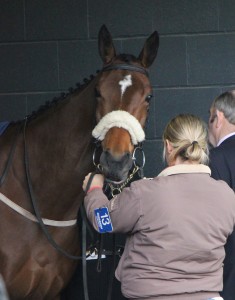