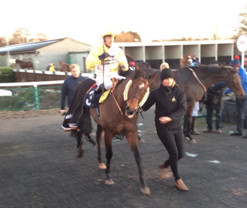 Pearl Acclaim travelled to Southwell yesterday to run in the Betway handicap over 6 furlongs with Steve Drowne taking the mount aboard the David Griffiths trained son of Acclamation.

Drawn in 1 for the 10 runner event, he broke smartly from the stalls to take up the lead in the early stages of the contest. At the 2 marker Steve got into full drive and kept Pearl up to his work and went on to score by over 2 lengths.

It gave us our 42nd winner of the season and a first for the Ontoawinner & David Griffiths combination, a fantastic result for all involved.

Pearl Acclaim is a horse that will be campaigned throughout the winter and he looks like he could potentially follow up based on yesterdays success. We do have shares available : http://www.ontoawinner.net/syndicate/pearl-acclaim