Review of Mitchells Way at Ayr

Mitchells Way ran in the 2m 4f novice hurdle at Ayr yesterday. This was a race that had a couple of very decent horses , with the Donald Mc Cain “Sydney Paget” being sent off a very firm and short price favourite. Gordon Elliot, sent over recent Fairyhouse winner “Don’t Back Down” in an attempt to secure back to back victories for the mighty Gigginstown stud team.

“Because we can” led from the off and set off at a decent gallop , Fearghal Davis held Mitchells Way up towards the rear of the field for the most part.  Mitchells Way jumped well throughout and travelled well on the soft ground.

Turning for home, Mitchells Way was in 5th position and being pushed along. At this stage of the race , the favourite was cruising and eased into a comfortable lead. With 2 left to jump, both Higgs Boson and Mitchells Way began to stay on and claim 2nd and 3rd respectively.

This was a good performance at the weights from Mitchells Way , beating some nice horses home. It was another good day at school for Mitchell’s Way. He will be competitive over a trip over timber and fences.

Simon Spoke to Alan Swinbank soon after the race, Here are his thoughts:

Alan thought it was a really nice run today and that we have finished in front of some nice horses.  Fergal thinks we should step up to 3 miles but Alan felt we should step up to 2m 6f before trying him over 3m. We will give him a couple of weeks to see how he is then. Alan reported that Fearghal hadn’t been too hard on him and felt there was still more to come Alan wants to keep him going until the ground gets firmer and get him the win he deserves.

It was a really nice run from Mitchells Way. He got slightly outpaced coming into the home straight then stayed on nicely again. Fearghal Davis was very pleased with his jumping and attitude. He says that Mitchells Way will easily get 3 miles in the future. His advice was to eventually aim at a 3 mile handicap. The winner was potentially top class and we would have taken 3rd prior to race.

Another pic of Eastern Seel in the snow! 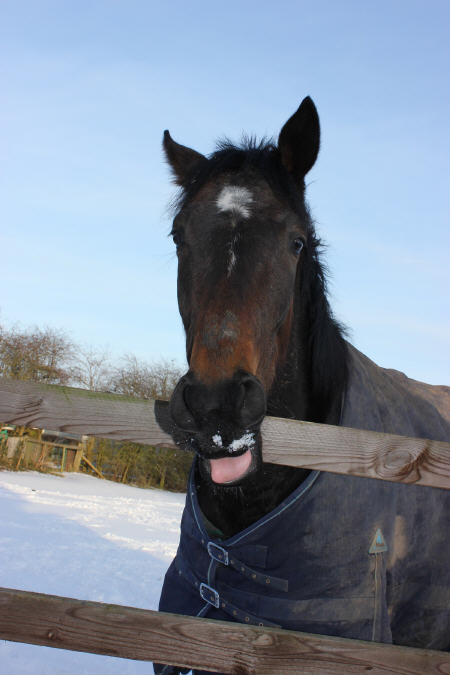