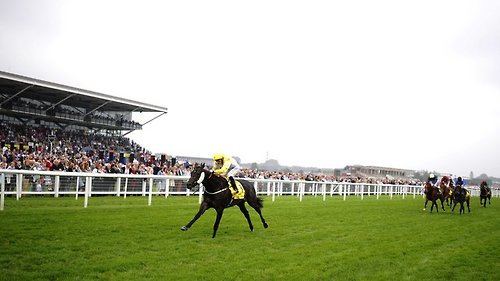 After a couple of weeks without a winner it had been a frustrating time as we strived to get our 50th winner. The horses had been running well with plenty of placed efforts and decent prize money earned but as everyone knows winners are massive in this game. A few months ago Saturday 16th April was dubbed Super Saturday and who would believe five months down the line another Saturday would surpass that day. Not only another winning double on the day but our first Group Winner, a Class 2 handicap winner and a fantastic placed effort in one of the top sprint handicaps of the season. A big thank you to everyone involved with Ontoawinner and it really is onwards and upwards as we strive to reached 100 winners now, your support is great appreciated.

Burnhope kicked off the runners for the week when he ran at Brighton on Monday in the seven furlong handicap and Mathew Hopkins rode. The horse broke well from the stalls and was up at the front disputing the running. Burnhope wearing special shoes looked like he was enjoying himself on the undulating track. Around two furlongs out three horses which included Burnhope had got a break on the rest of the field and the finish looked likely to involve these three runners. At this point a horse on Burnhope’s right took the lead but immediately begun to drift across the track towards the far rail. Burnhope was carried across the track as the new leader veered right across. The leader veered until he got to the far rail and Burnhope was forced to check as the other horse involved was also forced to check. Mathew gathered Burnhope together again and having been stopped he got Burnhope rolling again and inside the final furlong they where running on again and at the finish he was only just denied second place finishing a gallant third. A good run from Burnhope who without the interference might well have finished in second. Let’s hope now he can kick on from this performance and run well the next time we see him.

Toocoolforschool ran at Newbury on Saturday in the six furlong Group 2 Mill Reef Stakes and Silvestre De Sousa rode. The ground was described as soft which was an unknown before the race. TCFS was virtually written off by many pundits believing that his improvement had begun to plateau after only finishing second last time out in a listed race, how wrong was he going to make them feel. From the start the field headed down the centre of the racecourse and TCFS went off in front and wearing first time cheek pieces he was settled into a great rhythm at the head of affairs. Around two furlongs from home Silvestre just begun to push at TCFS and that immediate injection of pace had every runner behind him in trouble. TCFS was not stopping, Silvestre was keeping him going on the soften ground whilst all his rivals appeared to be running on the spot. TCFS kept stretching his lead inside the final furlong as the other runners fell off the TV screen and in splendid isolation TCFS crossed the winning line seven lengths clear winning a Group 2 race. A simply breath taking performance and no one could of imagined the easy of his success especially in a Group race. Karl’s phone hasn’t stop ring with congratulations and agents sniffing around. The horse is ore than likely be put away for the winter now and we will see what the next few weeks bring in terms of offers (which there will be) but also future plans for next season should the decision be made to keep him. How fitting a Group 2 winner was our 50th winner as well.

Fast Shot ran at Ayr on Saturday in the six furlong Ayr Gold Cup and Rachel Richardson rode taking seven pounds off. The ground was against him with it being called the fast side of good. Drawn in stall 25 on the previous races run on the sprint course his draw looked good but being a hold up horse there where fears that with lots of the field migrating towards the stand side rail there would be traffic problems for Fast Shot at the business end of the race. From the off Rachel settled Fast Shot in midfield against the favoured stand side rail but as anticipated with lots of runners coming across Rachel and Fast Shot found themselves three quarters of the way back in this group of runners whilst a group of runners who had been in single figures went to the far side rail. Rachel penned in was happy to track ultimately the eventual winner of the race as the race begun to develop. Inside the final two furlongs the race took off and with several horses mounting a challenger to the early leaders Rachel eased Fast Shot off the rail to come and make her challenge. The winner of the race who she had been tracking shot clear of the field and the scarp was now for minor honours and place money. Fast Shot was in full stride and was passing toiling rivals and was finishing the best of all. At the winning line several horses flashed past the post with the added complication of a few horses on the far side being involved in a photo finish for the minor honours. The result was called and Fast Shot and Rachel had finished in 5th place which rewarded each way bets with most bookmakers. A fantastic effort from a horse that wants slower ground and had banged himself in his box 48 hours before the race.

Piceno was due to run at Ayr on Saturday in the seven furlong handicap but due to the ground and he didn’t want to risk YAIOF so he will be kept for other races later in the season.