Zoravan gets the season off to a flyer

Zoravan lined up in the Class 4, Get Doncaster Moving handicap yesterday at Doncaster. He was drawn in stall 13 for the 21 runner race with the talented Rowan Scott taking a valuable 5 pounds off.

He broke smartly and Rowan when into a share of the lead quickly, travelling smoothly into the race, Rowan went into a clear lead with 2 to go. He kept him up to his work and he led from pillar to post to land the prize at a price of 28/1, a great start to the turf season! 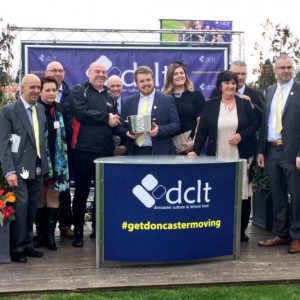 Made of Honour made her racecourse debut in the following race, she was drawn in stall 1 for the 12 runner event with Dougie Costello aboard the 3 year old daughter of Casamento. From the gates she broke well on the right side of the field. As the race developed the well-bred Godolphin favourite looked to be travelling superbly. Dougie got busy on Made of Honour and she responded to chase the leader and finished an excellent second on her racecourse debut. Her owners can look forward to plenty of good days out.

Hamriyah was due to run in the following race but got worked up in the stalls. He looked really well today and handled the preliminaries well. He realised he was at the races and got on his toes a little beforehand. He loaded well enough but got frightened by the Godolphin horse in the next stall playing up. The anxiety of the eventual winner next door spread to Hamriyah who got jittery and kicked the back gates. He cut himself and the starter had no choice but to ask him to be removed in case he was injured. He had a few cuts that will heal quickly. We’ll need to go for a stalls test next. It’s a minor setback, but he will have learned a bit today too and hopefully we can get back on track before too long.

Flying Pursuit ran in the 4th race on the card on a busy day for Ontoawinner. He ran well enough and will come on for it. He has a host of options for the season ahead and hopefully the handicapper will drop him a few pounds for that effort.

Cosy Club lined up in the 1 mile handicap in Cork where Gary Carrol was aboard the Adrian Keatley trained son of So You Think. It was a typical competitive Irish Handicap and Cosy Club was sent off at a price of 16/1. Cosy Club pinged the stalls in his usual manner and showed excellent early pace. On the kick for home, he was caught slightly on his toes and lost ground. Just when it looked like he would be swallowed up by the field, he showed excellent attitude to battle on gamely to finish a very good fourth. Gary felt he could be stepped up in trip and is a sure fire winner for the season ahead.

Entries for the week ahead.

Yeeoow has been ENTERED at Southwell on Thursday the 6th of April over 6 furlongs. Jockey TBC