We are delighted to offer this cracing bay filly by Ardad. She goes into training with Adrian Keatley at his Malton Base.

Ardad, the Flying Childers winner was a breeze-up sales-topper and won the Windsor Castle in a faster time than Profitable’s G1 King’s Stand on the same day. He is Kodiac’s most impressive ever Ascot winner when he memorably streaked more than three lengths clear in the Windsor Castle Stakes beating future leading sprinter Battaash on the day. The victory earned Ardad a Timeform Timefigure of 111, the highest of any Royal Ascot juvenile by specialist Royal Ascot sire Kodiac. Ardad went on to defeat an elite field of sprint two-year-olds in the G2 Flying Childers Stakes, where future stallions The Last Lion and Prince Of Lir were among those he defeated. He was ridden that day by Frankie Dettori who said, ‘Ardad’s very fast. He’s blessed with natural speed.’ John Gosden, Ardad’s trainer, said of him, ‘A strong, fast, powerful and precocious colt with a great mind. A pleasure to train and a real Royal Ascot two-year-old.’

Adrian Keatley on the filly:
“I loved the sire as a racehorse and think he could be a very good stallion. This filly looks and moves like a nice horse and she is great value for potential owners. 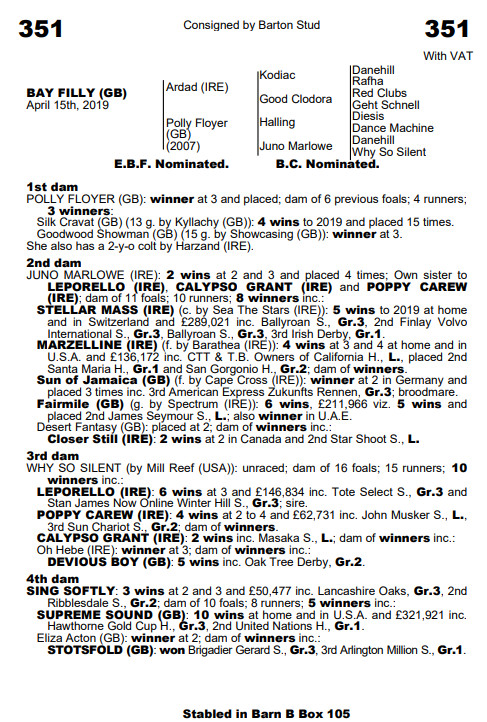