We are delighted to offer shares in this Battle Of Marengo filly who is a fantastic National Hunt prospect for coming seasons.

The Sire, Battle Of Marengo was a Group 2 winner at both 2 & 3 years of age for Aidan O’Brien and Coolmore. He was a top class performer over 12 furlongs and placed 4th in the Epsom Derby! As a sire, he has produced plenty of winners and is a stallion who just getting going.

The Mare, Cresta Rise is by the Epsom Derby Winner – Authorized. She is out of a black type mare in Cresta Gold who has already produced a black type winner in Rhagori. Our filly’s dam has already produced a winner from 1 runner in our own Champagne Terri who is a dual winner on the flat and recently won a juvenile maiden hurdle impressively at Doncaster. We think a fair bit of Champagne Terri who will certainly go on to better things.

We were offered this filly by Adrian and couldn’t say no, she came recommended by Adrian and the team who broke her in. She has a good walk, is a strong filly for a May 3 year old jumping type and is entitled to grow a few inches; she’s a scopey filly.

If National Hunt is your thing then this filly is for you, she has all the scope to make a nice hurdling type. Get in touch quickly to get involved as we don’t expect shares to last long! 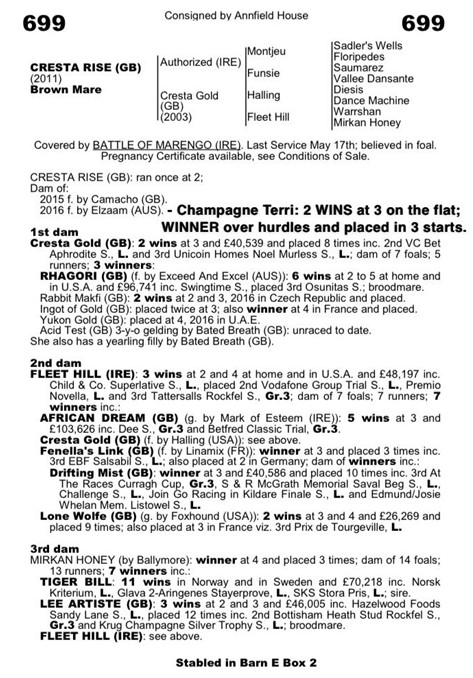