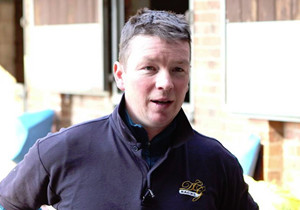 David started his career in racing in 1990 at Ian Baldings at Kingsclere, this is one of the best groundings any young jockey starting out could ever have. Whilst there he rode winners for many high profile owners including the Queen , Paul Melon , George Strawbridge and many more. During winter months he also rode in America and Australia.
He moved on in 1997 to Reg Holinshead where he continued his apprenticeship before becoming a free lance jockey.In 2000 David was involved in a gallops accident ultimately ending his riding career and leaving him with a fracture of the vertebra (c2). Although no longer being able to ride as a jockey David was very focused of his future of training him self and after recovering from his injury he worked at William hill radio & for Mr David Barron and then went on to become a jockey coach at the Northern Racing Collage. In this time he also met his wife to be in 2010 David begun training career. He has a hugely successful operation with winners in England and Ireland also winning 3 listed races and 2 group twos to date and numerous high grade handicaps from only a small string of horses.