We are delighted to offer this cracking gelding by hot sire Due Diligence. He is in training with Adrian Keatley and will be ready to run in the first few weeks of the season, which is only a matter of weeks away now.

The sire, Due Diligence is by the mighty War Front. Due Diligence was actually rated higher than War Front at his peak and was champion sprinter in Ireland in 2014. He was 2nd in the Group 1 Diamond Jubilee Stakes at Royal Ascot as a 3 year old, a hugely impressive feat against older horses. He stands at the very astute Whitsbury Manor Stud who also stand Showcasing. He has made a fantastic start to his career as a sire and was leading first crop sire of group and stakes winners in 2019.

The dam – Secret Romance is by Sakhee’s Secret. She won over 5 furlongs on debut and finished 2nd on her next start, she only ran twice. She is the dam of 2 winners from 3 runners. Her offspring Triple Spear was a winner at both 2 and 3 years of age and Adaay Secret was also a winner at 2. The grand dam  – Our Little Secret was a winner of 6 races and she has also produced 5 winners, most notably – Pearl Secret who was a winner of 7 of his 26 starts (22 of which were top level stakes races). He now stands at Chapel Stud.

He is very reasonably priced and by a sire that we really like. He will be running in the first 5 furlongs races this year. With only weeks to go until the start of the flat season,  shares wont last long. Get in touch to avoid disappointment.

Adrian on the Due Diligence colt:

“This lad has been very sharp since day one. He is very forward and is well up to running and winning early this season. He is very professional.”

Share prices include: Purchase price, sales house & bloodstock agents commission, vetting and transport. Naming rights are available with a 15% share purchase. One free Owners and Trainers race day badge with a 2.5% share, two free badges with 5% and over. 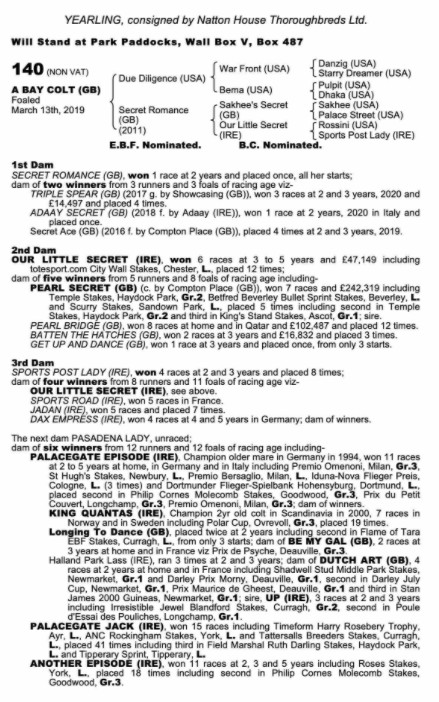