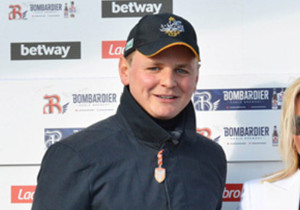 From a farming family based near Dorchester in Dorset, George has always been around horses and thoroughbreds, albeit his family’s racing roots revolved more around National Hunt horses. As a teenager it was clear that George’s interest in racing was overpowering his interest in traditional education, spending more time studying the form book rather than any book in the curriculum. Upon leaving school George started working in the bloodstock business, first for Luke Lillingston and then for Tom Goff (Blandford Bloodstock) at the sales on both sides of the Atlantic. Following that George went to Newcastle University to study Agriculture and Business Management, after which he travelled to Australia where he worked for two of the biggest names in Australian racing. In Sydney he worked for Gai Waterhouse and then on to Melbourne where he worked for Lloyd Williams. George returned from Australia to work for Hugo Palmer in Newmarket where he spent six years as assistant trainer, for two years of which he oversaw the running of Hugo’s 50 box satellite yard, Yellowstone Park Stables, on the Hamilton Road. On 1st July 2019 George was granted a licence to train in Newmarket.