We are delighted to offer this absolutely stunning filly by a stallion that needs no introduction; Kodiac. She is a very impressive filly who looks an early runner. If you are wanting an early sprinter by a top 2 year old sprint stallion with proven quality on the page, look no further.

The sire, Kodiac, needs no introduction, he was the champion sire of 2 year olds in 2017, creating a world record. He was the champion sire of 2 year olds in 2018. He was the champion European sire for winners in 2018. His produce had Group 1 winners in 2018 from 6 furlong to 1m 4 furlongs. His stud fee is €65000 standing at the astute Tally-Ho Stud. His best progeny include Fairyland and Tiggy Wiggy who both won the 2 year old Group 1 Cheveley Park stakes and Group 2 Lowther stakes in 2018 and 2014 as well as the new stallion to the Tally-Ho ranks Kessaar who in 2018 won the Group 2 Mill Reef stakes for 2 year olds. Kodiac has produced countless other top class horses to win top class races especially with 2 year olds, he really is a top class stallion.

The Dam, Dutch Destiny was a winner at both 2 and 3 and placed a further 4 times. She is the dam 1 previous foal by Lethal Force.

Our filly has taken after the stallion very well, she is a compact, strong sprinter who should be a 2 year old.

Adrian Keatley on the filly:

“She isn’t a big filly but she moves well and looks like a racehorse. She is by a fantastic sire and we liked her. For the money, she could be a terrific buy.” 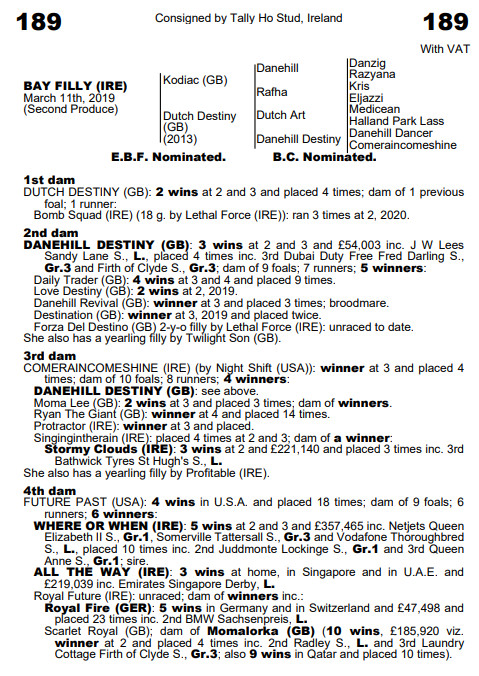