We are delighted to offer shares in this Prince of Lir filly who goes into training with Adrian Keatley in Malton.

Prince Of Lir has had a fantastic start to his stallion career with The Lir Jet, one of the most impressive 2 year olds we have seen in some time. He rattled up on debut and won the  Group 2 Norfolk at Royal Ascot this week. He has recently been sold to Qatar racing by the same consignor.

Prince Of Lir, who resides at Ballyhane Stud is by the mighty Kodiac. He was trained by Robert Cowell and was a superb sprinter. He won a nice conditions race on debut at Beverley and only 2 weeks later he went on to win the Group 2 Norfolk at Royal Ascot, beating a very high class field in the process. Kodiac has produced countless other top class horses to win top class races especially with 2 year olds. Prince of Lir’s first crop fetched up to 260k and his first 2 year olds hit the track this year.

The dam, Rio Yuma by Gold Sphinx (USA) placed twice during her racing career. The grand dam is a half sister to Leadership who was trained by Saeed bin Suroor to win the Group 1 – Gran Premio di Milano in Italy.

This filly comes highly recommended and has been very well prepared by the consignor. She is sharp and will be winning a maiden this year.  Now is the time to get involved as she will be ready to run in a couple of weeks time. 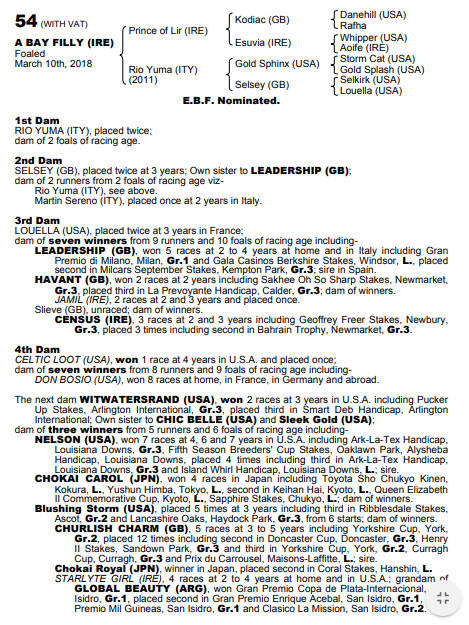