Ontoawinner had a week to remember landing 6 wins throughout the week including our first treble on Wednesday.

Star Of Emaraaty kicked of the week in fine style with a gutsy win at Ayr. She will take the next step to listed level this week and is a filly with a bright future. Notably, she was the first winner for Pride of Dubai in the Northern Hemisphere.

Corinthia Knight was next up winning at Bath under a fantastic ride from Hollie Doyle. That was his 12th success and the win meant Ontoawinner have won at every flat track in the UK. Corinthia Knight has given his owners some fantastic days out and has won £327k during his career so far!

Later the same day, the Adrian Keatley trained Queen of Rio, by Prince of Lir followed Corinthia and made her debut a winning one at Ripon. She is an exciting filly who will now look for some blacktype.

Champagne Terri brought up our first ever treble under a lovely ride from Ben Curtis at Ayr. She is a cracking dual purpose horse for her owners. She is up to winning more races this season.

Beechwood Donna won on her debut at Beverley on Friday. She led from pillar to post to score easily under Tom Eaves. She our most impressive winner of the week and her owners can look forward to some good days out. She was a 17k purchase and she looks classy!

Secret Handsheikh was our final winner of the week. Like buses, we wait for 9 years to have a winner at Bath and we get 2 in a week. He showed a fantastic, gutsy attitude to break his maiden under Adam McNamara.

Well done to all owners on your success, it was certainly a week to remember.

The Mayson colt broke well from the stalls and Adam (McNamara – Jockey) brought him over to track the early leaders. As the race unfolded Secret Handsheikh made his challenge and it soon became clear it would be between our lad and the favourite; Secret Handsheikh found plenty for pressure to win by 1/2 a length!

Well done to all his owners on your success, he learnt plenty from his debut and you’d have thought he’ll go on from here! Thank you and well done to Archie Watson, Adam McNamara and all the team at the Saxon Gate!

Secret Handsheikh was purchased by Blandford Bloodstock and the Ontoawinner buying team at the 2019 Tattersalls Ireland September Yearling Sale for €32,000!

Beechwood Donna made a big impression to land the spoils on debut at Beverley‘s Friday 17th of July meeting!

The Hot Streak filly broke smartly to take the early lead under Tom Eaves and with two furlongs to go Tom sent her 2 lengths clear; she was not for catching and the lead only lengthened as the filly won by a comfortable 3 and 3/4 lengths!

Well done to all her owners on your success, this is just the beginning for the filly you’d have thought! Thank you and well done to Kevin Ryan, Tom Eaves and all the team at the yard!

She was purchased by Kevin Ryan and the Ontoawinner buying team at the 2019 Goffs Premier Yearling Sale for £17,000, she looks well bought!

Champagne Terri landed the spoils in the final race at Ayr yesterday to cap off a memorable day for Ontoawinner.

She brought up our first ever treble and we also celebrated our first win at Bath which means we have now had a winner at every flat course in the UK, a day of milestones!
Corinthia Knight opened our account at Bath under Hollie Doyle, winning his 12th career race.

One of our newest recruits, the Adrian Keatley trained Queen of Rio, by Prince of Lir followed Corinthia and made her debut a winning one at Ripon. She was green but showed tremendous attitude to win under Martin Harley.

Champagne Terri brought up the treble under a lovely ride from Ben Curtis. They went a good pace and she hit the front and wasn’t stopping. An across the card double for Adrian Keatley and a treble on the day for the Yellow & Whites. Dreamland!

Corinthia Knight won well at Bath today under a masterful ride from Hollie Doyle. Drawn wide in stall 9, he was well away from the stalls to go into a share of the lead at the first bend.

Racing prominently throughout, Hollie asked Corinthia to go on at the 2 marker and he responded in game fashion to go into the lead. He repelled all late challengers to go on to score by a neck from the fast finishing Big Lachie who is trained by Mark Loughnane.

That was Corinthia Knights 12th success, a remarkable achievement from the 5-year-old son of Society Rock. This is a horse that placed 4th at the Breeders Cup, was 3-year-old all-weather sprint champion in 2018 and has taken his owners to Royal Ascot, France, Canada and also won a listed race in Sweden.

Huge credit must go to Archie and all of the team at Saxon Gate. That was Archies 23rd for us and Hollies 6th, long may it continue.

The win brought up another significant milestone for Ontoawinner. We have now had a winner at every flat course in the UK. Bath was the last course on the list for some time. We have now registered 217 winners since we formed in 2011 and had some fantastic times along the way. We move on and look forward to ticking many more milestones off the list.

Emaraaty a star at Ayr!

Star Of Emaraaty proved she is a filly with a bright future after she made all to seal victory at Ayr‘s Monday 13th of July meeting!

The Pride Of Dubai filly broke smartly to take the early lead and Kevin Stott decided he would let the filly bowl along out the front, it was a good decision as Star Of Emaraaty would fend off all challengers gamely from the front to make all, sealing the victory by a neck!

Well done to all her owners on your success, this is just the beginning for the filly you’d have thought! Thank you and well done to Kevin Ryan, Kevin Stott and all the team at the yard!

Star Of Emaraaty was purchased privately by the Ontoawinner buying team prior to the postponed breeze-up sales, she looks well bought!

She was the first winner for Pride of Dubai in the Northern Hemisphere.

Click on the below picture for a good article from today on the sire. 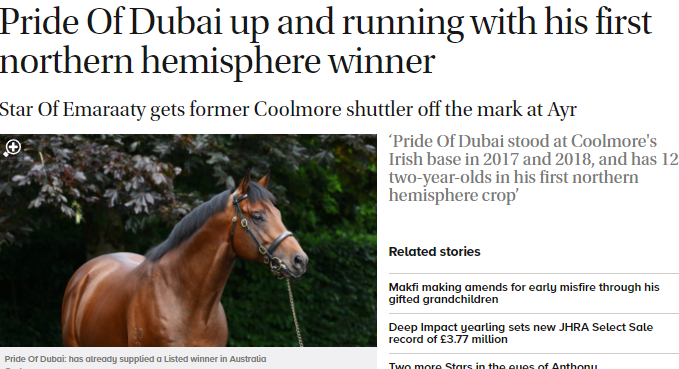 Temper Trap has the power at Musselburgh!

Temper Trap backed up his good 2nd on Monday to win at Musselburgh at their Friday 10th of July meeting!

The Slade Power Gelding settled in behind the pack for most of the race until push came to shove when Temper Trap started to make good headway, as the line approached Temper Trap managed to collar the long time leader to win in a photo by a nose!

Well done to all his owners on your deserved success, patience has been the key to him and hopefully he goes on from here! Thank you and well done to Tim Easterby, David Allan and all the team at Great Habton!

Temper Trap was purchased by Tim Easterby and the Ontoawinner buying team at the Goffs Premier Yearling Sale for £30,000!

Well done again to connections on your deserved success, hopefully this is just the beginning for Temper Trap!

Rishworthian breaks his maiden at Thirsk!

Rishworthian made it 3rd time lucky to score in style at Thirsk’s 6th of July meeting, making good use of the first time visor!

Danny Tudhope was aboard the David O’Meara trained colt for the 6 furlong contest. Breaking sharply, Danny settled Rishworthian just behind the leaders in the early stages of the race. As the race started to unfold Danny moved Rishworthian to the outside to make his challenge, it was soon clear Rishworthian would be in the shake up and he hit the front and stayed on nicely to win by 3/4 of a length!

Well done to all his owners on your success, he has finally shown what he does at home on the track and looks to have nice future! Thank you and well done to David O’Meara, Danny Tudhope and everyone at the yard!

Rishworthian was purchased by Jason Kelly and the Ontoawinner buying team at the Goffs Sportsman Sale for €8,500! 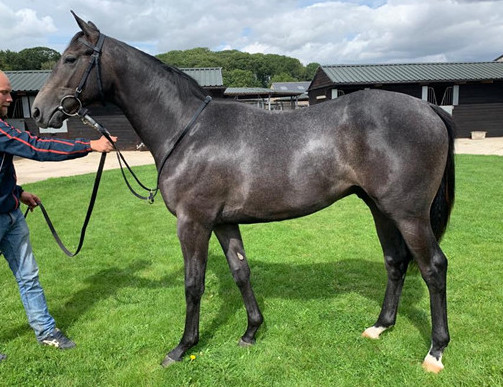 We had another couple of 2 year old runners today – Tuesday 16th June.

First up was the David O’Meara trained My Best Friend who was making his racecourse debut in the opener at Thirsk over 7 furlongs. Ridden by David Nolan, he was a bit awkward leaving the stalls but David bustled him up to sit 2nd off the favourite. He travelled very well throughout but paid the price late on for taking on the winner when he tired to finish 5th. It was a very pleasing debut and David was complimentary about the horse saying that he could easily drop back to 6 furlongs if needed.

Merry Secret was making his second start for Tom Ward at Windsor. He was drawn in 1 for the 6 furlong race with Rob Hornby taking the mount. He was settled in mid division on the rail for the most part. As the leaders kicked for home, Rob switched Merry Secret out and he began to make good headway to finish a close up 4th. This was a difficult race on paper with some nicely bred horses. Merry Secret performed well and will have easier tasks ahead. Well done to both sets of owners.